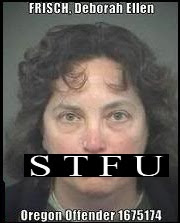 Eugene (Jan 6)--A routine surf of Miss Debbie's
blogs today revealed only Blogger's routine 404
message. "Sorry, the blog at...has been removed,"
reads the message. "This address is not available
for new blogs."

It's unknown whether this is a temporary error
--or the result of a permanent change.

Also unknown (if the removal is permanent) just
what sequence of events gave rise to the removals.

The monitoring service Sitemeter.com confirms that Miss Debbie's blogs
have not received a single visitor since 18 December. Of course, this
would make sense if the blogs ceased to exist, since then there would be
nothing to "visit."

The development would also point to a most delicious possibility: the chance
for a 100% Frisch-free 2012.