On Monday Sept. 20, a Federal judge ordered Miss Debbie's
sockpuppet email address (coyotemind@gmail.com) to be
blocked for her continued sending of "vulgar" and threatening
emails to teh federal court.

COPY OF COURT ORDER AT THIS LINK

Teh Deb has been howling with conniptions since teh EPIC
FAIL of her frivolous lawsuit; teh last part of Debbie's incompetent
suit was dismissed last month.

This is teh second STFU order issued by teh judge; an earlier one,
issued in January, blocked Frisch's usual email address
(dfrisch@pobox.com). Frisch has also been banned from entering
federal courts in Oregon, thanks to a court order issued in May.

In teh vile and incompetently scribbled motion [TEXT OF MOTION
HERE], Miss Debbie begged teh court to give her access to teh
audiotape of her vile and threatening remarks while she was
being transported to teh Lane County Jail on Sept. 21.

Of course, since teh 9th Circuit Court has already said that Debbie
Frisch's frivolous lawsuit is a "closed case," dummy Debbie can look
forward to teh court laughing off her toothless attempt to get hold
of a tape containing Debbie's vile, vulgar and threatening tantrum
after Debbie was duly arrested and carted to jail for violating teh
terms of her probation...

Of course, even a blind pig can find an acorn now and again--and so
there IS one truthful sentence in Debbie's blathering rant:

"once October 5 arrives, it’s all over" 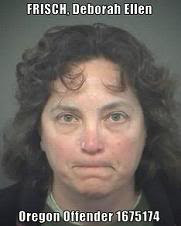 Eugene (Sept 23)--Deborah Ellen Frisch failed to exercise her 5th
Amendment right to STFU when she was arrested on Tuesday,
Frisch stupidly blogged this morning.

It's, as yet, unknown the exact threats and vileness on the tape--
though Frisch spat out threats on nearly every legal official who
are FINALLY holding Miss Debbie responsible for her criminal
actions.

Beyond that, few details are known--but rest assured Teh Squeak
is working teh phones to get a copy!

Eugene (Sept 22)--Oregon Criminal 1675174 will
twist in teh wind a little longer before being arraigned
on criminal charges that she violated her probation.


Sources confirmed today that Little Miss Debbie's date of
arraignment has been re-set to October 5th.

Frisch had originally been slated for arraignment today.
No reason was given for teh change in schedule.

True to form, dimwit Debbie still appears unaware that
her criminal actions have consequences. Just hours after
Frisch's arrest--just before 11:00am yesterday--Teh
Deb vomited vulgar and vile posts on her blog, and
others.

Frisch also filed a frantic, incompetent brief for teh
Eugene Federal District Court. Typical of Deb's
stupidity, she still fails to realize that her frivolous
lawsuit has been a corpse for over a month.

Miss Debbie's arrest stems from her violent harassment
of various parties over teh Labor Day weekend of
September 4-5. Deborah Ellen Frisch has become
quite teh bully in teh 18 months since her March
2009 conviction for drunkenly assaulting an
acquaintance in November 2008. Teh terms
of Frisch's criminal sentence included 3 years of
court-supervised probation.

But it looks like authorities' patience with Debbie's
criminal habits of stalking, harassment, threatening
and assault and battery appear to be drawing to an
end.

**SOURCES: FRISCH TO BE CHARGED WITH VIOLATING PROBATION DURING
VIOLENT BLOWUPS OVER WEEKEND OF SEPTEMBER 4-5

[UPDATES AS THEY HAPPEN!!1]

Frisch was arrested for repeatedly her probation, imposed after her
2009 criminal conviction for assaulting an acquaintance.

Teh Deb's arrest follows a month of escalated batfrisch CRAYZEE on
Debbie's part.

Teh result? A blizzard of vile, vulgar, libelous and racist blog posts!

In addition to these links), below are screencaps of Debbie's infantile racist posts.

Debbie's temper tantrum, following civilized people's refusing to let disgusting Deb Frisch shit the carpet, reminds us of similar such events in April and this month. (On those occasions, Frisch was attempting to enter drinking establishments, in violation of teh probation slapped upon Deborah Ellen Frisch [aka Oregon Criminal 1675174], which runs through March 2012.) VILE DEB FRISCH VIOLATES HER PROBATION,
GETS BOOTED FROM BAR!!

According to several eyewitnesses, Dummy Deb Frisch entered a drinking
establishment (teh 2 Friends Pub and Pizza), and fouled teh air with a
vile and violent outburst toward several patrons and teh bartender.

Eyewitnesses confirmed that Frisch exploded with rage when teh bartender
informed Debbie of teh "two drink minimum." Frisch shouted obscenties
and epithets (including teh f-bomb and teh n-word) until she was shoved
out of teh establishment. Several patrons then informed teh bartender of Frisch's lengthy criminal record of stalking, harassment and assault, and Frisch was banned from re-entering teh establishment.

Miss Debbie's appearance at teh establishment violates her probation--which runs through 2012, and forbids Frisch from entering any drinking establishment.

Debbie's shit-fit this weekend reminds Frisch observers of her April 2010 violation of probation--when Springfield police recorded a criminal complaint against Frisch for trespassing, stalking and harassment.

It remains unknown what sparked Dummy Debbie's latest frothing inferno. Frisch has been increasingly erratic since her frivolous lawsuit was nuked by lawyers who proved a thousand times smarter then Miss Debbie, leaving Debbie to surrender and beg for mercy, last month.

One amusing irony: Miss Debbie pitched her latest blubbering shitfit over teh Labor Day weekend--a day to celebrate people who, unlike deadbeat Debbie Frisch, actually WORK for a living.

Deborah Frisch has been unemployed since 2006, when she made threatening, sexual remarks about a two-year-old boy on teh internet. Since then, Frisch has scraped together beer-money by panhandling, scamming food stamps, and fraudulently renting a cottage on a property she doesn't own.