Lane County (Aug 24)--Word has surfaced that Dummy Deb Frisch
got yet another visit from Lane County police.

According to police dispatch reports, Teh Deb was teh subject of a
complaint at 12:20pm on Thursday.

Dummy Debbie was AWFULLY busy that day, spewing all sorts of
crap on her blog. Looks like Debbie Frisch also decided to do a bit
of "drunk dialing," to boot.

This is teh THIRD recent police visit to come to light--Debbie was
also teh subject of complaints in August 2009 (when Deb Frisch
made a death threat) and April 2010 (when Debbie tried to violate
her probation by entering a barroom dance; of course, bouncers
quickly 86ed teh carpet-soiling toddler). Frisch also received a not-so-
friendly visit from teh FBI, after Debbie sent a threatening email to a
Federal judge, in January.

Debbie has also been convicted of two crimes, in 2006 (when she
stalked and harassed a woman who wouldn't sex Debbie...ew) and 2009
(when Debbie assaulted and harassed an innocent victim who had
teh GALL to offer Frisch a ride home). Word is also swirling that
Debbie Frisch recently committed FRAUD by subletting a property
she DOESNT OWN.

**CLICK HERE FOR SCREENCAP OF TEH DEB FRISCH
SURRENDER DOCUMENT!!!**

COMMEMORATIVE EDITION OF TEH DAILY SQUEAK: 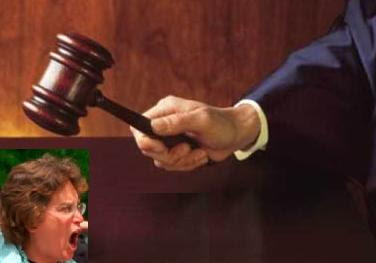 Eugene, OR (Aug 9)--Deborah Frisch has offered to SURRENDER her frivolous lawsuit, according to a web post Dummy Deb posted on Thursday.

According to teh post, Debbie emailed her surrender-offer to teh City of Eugene on August 3rd. In teh email, Debbie agreed to drop her lawsuit in exchange for ZERO DOLLARS, lol!

The desperate plea followed her unsuccessful attempt to interest an Oregon Magistrate Judge in overseeing settlement proceedings of teh lolsuit. Debbie made that pathetic maneuver on July 12th; teh judge laughed in Debbie's face teh following day.

It only took Miss Debbie 15 months to realize teh obvious: that her lawsuit was a frivolous pile of steaming muck, which could made Debbie liable for THOUSANDS OF DOLLARS in defendants' legal bills.

Even now, Debbie doesn't realize quite how screwed she pathetically is--even as late as Thursday, teh Deb seemed to think she had leverage to negotiate teh terms of her humiliating surrender.

Teh clock is ticking now. Tomorrow marks two weeks since Debbie filed a pathetic protest against teh Judge Magistrate's recommendation that teh last chuck of Debbie's turd of a lawsuit
be flushed. Which means that teh Federal Court can put teh final stamp on Debbie's total defeat any day now.

Will Debbie wise up and take teh deal? Or will Debbie's stoopidity triumph once again? Tick-tock, tick-tock--time will soon tell...


UNDER NEW MANAGEMENT!!!
DEBFRISCH.COM TO BE CONVERTED
TO "DEB FRISCH CONTAINMENT" SITE 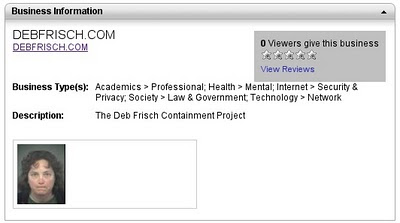