"Freedom of speech–however distasteful and rude
the speech may be, is crucial," Ms. Sierra wrote. "But
when those words contain threats of harm or death,
they can destroy a life."

Sulla seconded Gerbil Nation's support of this distinction
--and flagged teh Nation's continuing effort to hold
Miss Debbie accountable for falling afoul of it: "Those
of us," he wrote, "who have been witnesses to...the Deb
Frisch...matter can certainly relate. It is one thing to insult.
It is another entirely to post that which constitutes an actual
threat to your health, life, or sanity."

"Such MUST be opposed - loudly, consistently, and persistently,"
Sulla added.

Duking It Out With Miss Debbie--In Technicolor!

YouJean, OR (Mar 27)--In other news, recently appointed
Min. Psyops Kirk Gerbil and X-LA Native both ventured onto
YouJean's poisoned soil to engage Miss Debbie in a bit of
conversation. Here is teh transcript:

Largen: So, Deb, in the cold, semi-sober light of morning, you
thought better of last night's postings? Too bad, as we screen-
capped them all, and have forwarded them to the legal rep-
resentatives of the aggrieved parties. The screen-caps will
serve as evidence in the ongoing legal action. Thanks for making
it sooo easy! Your Bestest Pal, Kirk.

Teh Deb: The [sic] screen-caps certainly will be evidence in the
ongoing legal battle--thanks for your help!

Teh Deb: don't you have a wife and two daughters? why don't
you have anything better to do with your time than tinkle on
my ankle?

Largen: Nope. I'm retired, so I've a couple of decades to see you
imprisoned and/or institutionalized. Dummy. Your Bestest Pal,
Kirk.

Teh Deb: Kirk, even if you are retired, the question remains as to
why you don't have anything better to do with your life than collaborate
with Mr. and Mrs. Jeff [redacted] and Mr. Paul F. [redacted], Esqure
in their increasing bizarre, counterproductive and soon to be very
costly harassment of me.

Largen: You libeled me online, repeatedly.What more reason do
I need?...Oh, and did I mention your (attempted) stalking of me?
Yer not very good at it, really, but intent is what counts in the
courts. Dummy. Yer Bestest Pal,Kirk

X-LA adds: I'm curious what communiqué instigated the
latest batch of postings that have since disappeared.You're quite
predictable, Debbie: Spew, review, delete. The last action always
too late. How does it feel to rant in a vacuum? Where you've only
two types of audience - those that document and those that litigate
against you. For some reason, I don't think that's what you've been
hoping for. It's also clear that try as you might, you cannot erase
the fact that you alone have brought about the loss of your job,
relationship, and reputation. The latter will take YEARS to rebuild,
if ever.It'd be easy to make a start: unplug the computer. Get a journal.

Hollysqueak, CA (Mar 26)--In a surprise move, TEH-TV has
announced that it will pick up "Teh Crane Files" for a new
season. A new episode, which airs today, can be found here.

TEH-TV also announced the possibility of piloting a second
series, "The X(LA)-Files," which presents the story of a
red-haired FBI agent who investigates strange goings-on in
YouJean Oreygone, along with her canine sidekick, Fixed
Molder.

Miss Debbie served with a subpoena (Tuesday),
a further step towards her getting legally served.
Wurd.

Former Secretary of Defense Hosedragger is moving
to Kentucky (Wednesday) 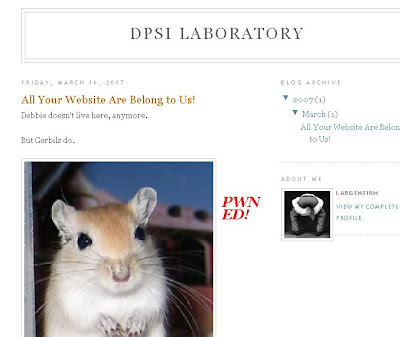 Gerbil Nation (Mar 14)--In a stunning move, Miss Debbie
has officially been COURTORDERpwn3d by Judge Crew of
Colorado!

Teh Capitol, GN (Mar 15)--Gerbils strived at teh most recent
"Gerbil Haiku Slam" to slam Miss Debbie. Teh result was pure
pwnag3!! 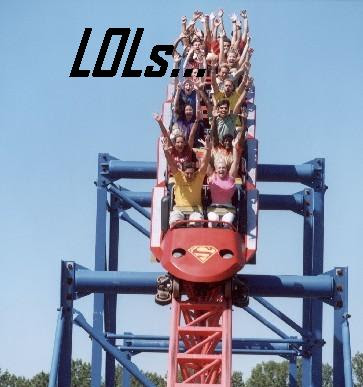 DEBBIE DOES HEHVARD!
Practices Her Wares in Moot Court

Cambweel, MA (Mar 13)--In an amusing demonstration, Miss Debbie presented her case before a trio of celebrated jurists at Hehvahd Law School's famed "Moot Court." Teh judges' comments on her performance were quite striking:

Justice David Boot'er: "Not since Wagner v. Miskin have I seen a pro se client run teh road to ruin so ravingly."

Judge Lief M. Clark: "Miss Debbie, what you've just said is one of the most insanely idiotic things I've ever heard. At no point in your rambling, incoherent response was there anything that could even be considered a rational thought. Everyone in this room is now dumber for having listened to it. I award you no points, and may God have mercy on your soul."

We see your future...

In today's Squeak, we begin a new column:
Future Shocker--Fortuneteller. . .

I've been carrying on a relationship with "Saul" for a few months now. At first, he courted me with libel suits and restraining orders, but now he hardly ever calls or writes. . .

I've been trying to catch his eye again by writing to his colleagues, and calling various lawyers in his neighborhood. (After all, persistence is tres sexy, n'est-ce pas? :-)) So far, though, everyone is IGNORING me! I'm INFURIATED!

If only I could get a few things from him--bling, dinner, and conversation--I'd be a happy peep. Is that too much to ask?! What can I do?! --TehBee, YouJean.

Dear TehB: As I held your letter, its vibrations were overpowering (...so was its stench, but we won't go there).

Not to worry--all of your wishes will soon be coming TRUE!

Bling? What lady wouldn't want a little shiny on her extremities? In your case, I see quite a heavy bauble! Helpful hint: practice shuffling.

Dinner? Oh, yes! I see a very great dining experience in your future. Helpful hint: water is the chic beverage to have with soggy bologna.

Conversation? I see a lot of it for you! Actually, I see conversation toward and about you. . .Odd! I even see a woman named "Miranda" telling you to STFU™! Helpful hint: When a woman named "Marge" describes you as a "dish," she's not talking about gossip!

Yes, TehB, you have quite a future in store for you!


What occasioned this emergency relocation? Teh source speaks: "Nedra Z and her anut were undercover agents for Teh Animal Rights Force (ARF). They were investigating 'bad dog homes' in teh Eugene, Oregon area when their cover was blown by a mole in teh 'FREE KIVA' task group." Asked to identify teh mole, teh source would only provide a sketchy photo and a cryptic directive:

The outing required emergency evasive action to ensure a low profile. Thus teh Nedra Lives! blogspot was removed by Nedra Z. Despite teh disheartening turn of events, Nedra Z's anut recommended staying cheerful: "Nedra Z didn't die. Nedra Z lives on in the hearts of her many readers. "

Night Train on Rail to Heaven :'(

"He got me through many a cold night," drawled
Mr. H. Cup, a Sid Crow parkbench philosopher.
"If it weren't for this stuff, where would I be?"

Some Orreygone natives are planning private
memorial services of their own. "I usually drink
Schlitz™," said a patron of Youbegone Wine
and Spirits. "But, today, I'm gonna stock up on
Night Train™, and toast Mr. Gallo in an
appropriate manner."

The patron, who would only identify herself as
Dyslexic Bed, also shared how Mr. Gallo had
impacted her life. "Before Night Train, I was
just another P.O.'d commie-lib," she said. "But
Night Train gave me teh courage to act out on
my political leanings. I'm unemployed now, but
I'm sure Stephen Colbert will be calling any day."