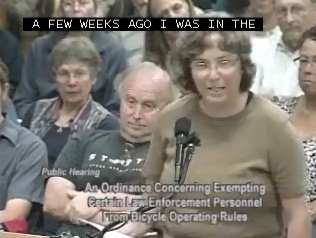 April through June--and teh first public sighting of Teh Deb since her lazy sit-ins at teh Occupy Eugene Medical Tent in July.

Miss Debbie's twitchy, spittle-flecked remarks included teh stoopid description of a Downtown riff-raff exclusion zone as "aggression against teh civil rights of a targeted population" and "a tool of discrimination!!!1"

In otehr news: One week since opening, Gerbil Nation 2.0 began taking bets on Miss Debbie's next arrest, with odds set at 3-1 by year's end, and 3-2 by next spring. 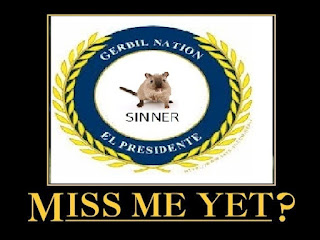 Gerbil Nation (Sept 14)--As Lord of Teh
Manor Jerrie Atrick put  teh final finishing
touches before teh launch of TehSqueak.com,
this newspaper managed to score a GENUINE SATIRICAL COPY of Teh Top Things retiring Presidente for Life Sinner plans to do upon his retirement to teh city of Gerbilsburg:

#10...Oil that pesky squeak on teh living room wheel that teh wife
has been bugging me about

#8... FedEx can of mixed nuts, filled with those popping skakey thingies,
to incoming overseer Jerrie Atrick

#2... Send a telegram to that English teacher also named "Deb Frisch":
"Retired today. Can we be friends now?"

And Teh Number One Thing Sinner plans to do in retirement?
#1...TRADEMARK A NEW LOLLYPOP BRAND NAME: "HOSTMONSTER SUCKS"!!1

And in otehr news...


Gerbil Nation 2.0 (Sept 13)--Tex Made coffee...Gerbils squeaked about politics...
And there was teh inevitable celebrity appearance of SWMNBN (j/k...sort of)

Teh New Gerbil Nation is ON TEH AIR!!!1