U-Jean (July 5)--The fallout from Dweebie's June 28th meltdown at the
University of Oregon continues.

Since videotape of Frisch's unhinged blather surfaced on Thursday, she has
responded by lobbing harassing communications (via email and telephone)
toward the video's cameraman, as well as a prominent Eugene civil-liberties
attorney.

After Frisch ignored the attorney's requests to cease the abusive emails, the
attorney forwarded a July 5th email she had received (from a still-unnamed
source) to a CC list containing numerous Eugene city officials and journalists.
The email linked to a website called the "Deb Frisch Database."

A review of the cited site reveals copies of legal documentation of Frisch's
two-year career of stalking, harassing and abusing various victims.

Even in the face of overwhelming documentation, Frisch responded with
fevered threats: "you forwarded anonymous allegations about me to a
group of people," she ranted. "The allegations are false and thus, you
have committed slander." (False? Just click the links and see...)

Then came the usual threat du Deb: "If you would like to provide me
with the name of the legal contact for and name of the person who
provided you with the false, defamatory information..., I will defer
my decision about whether to take legal action against you."

In other news, bookies have ceased covering bets against Dweebie's
being arrested for stalking and/or telephonic harassment before the
end of the year.

Text of the letter to the attorney about Frisch: 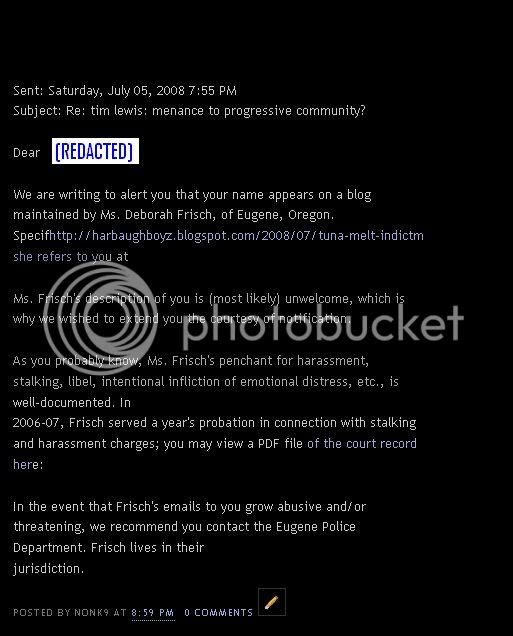 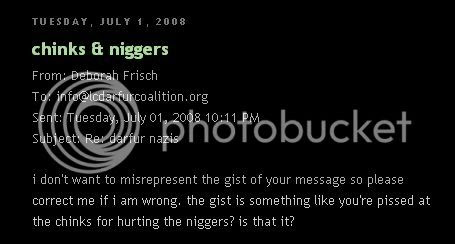 YouJean (July 1)--The aftershock of Dweebie's ill-fated June 28th
harassment campaign at the University of Oregon continues to
shudder.

Tonight, Frisch posted the above email to her blog. The addressee
is the Lane County Darfur Commission, which Frisch was trying to
harass when she was ousted from campus by concerned U of O
security officers. 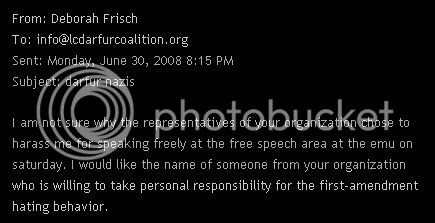