Well, it sure SUCKS to be little Miss Debbie this week...

In addition to being smacked with a restraining order by teh
Lane County Criminal Court on Monday, teh Eugene Federal District Court
also made permanent its order BANNING Debbie from harassing
federal court staff teh very next day...

Teh initial Federal Court order can be found here. 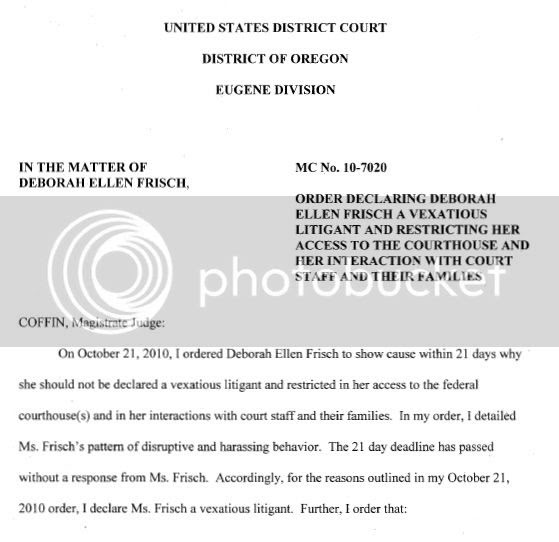 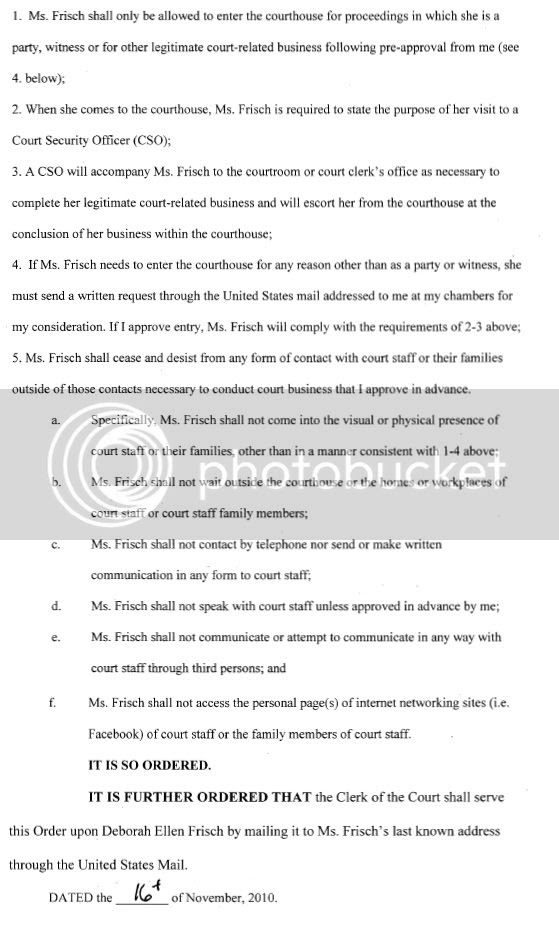 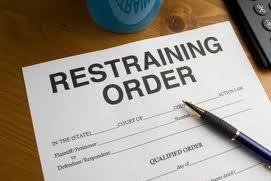 Eugene (Nov 15)--A Lane County Court has ordered criminal Deborah Frisch to cease and desist harassing a Federal Court clerk (and her family), after hearing of Frisch's 18 month campaign of threats and harassment.

DEB FRISCH'S "2 PLUS PI INCHES" OF DAMNING DOCUMENTS
When I got into court, Debbie's victim was reviewing her exhibits: a stack of
emails about five inches high.

She reading text from an email of September 30th sent to herself and another
woman regarding her deletion of a picture of "Lizzy and a cat" from her
Facebook page. She testified the emails came from coyotemind[@gmail.com].

Teh Victim was attempting to enter nasty emails from that address as exhibits.

The judge asked her what the significance of the present email was, and she
replied they showed Frisch was on her daughter's Facebook page looking at
pictures.

Teh Victim then began reading from a September 18th email regarding the
Fern Ridge School Board. It was stressful to receive these emails both at work
and at home, she said: "I just want her gone from any contact...My radar, my
children's radar."

The judge wondered whether the victim felt her personal safety as at risk,

Yes, answered teh Victim, due to Frisch's past history and probation. She
added Frisch has "violent tendencies" and is an "extremely smart person"
who would never strike her in a face-to-face encounter, instead preferring
to do something "behind the scenes" and "unexpected."

The judged asked why teh Victim had this impression of her stalker, who
explained Frisch used to come into her office and be agitated and emotional
in person, which is why she felt any attack by her would be either immediate,
because she didn't think about her actions, or "roundabout," not person-to-
person.

Next Judge Kasubhai asked the plaintiff whether any emails explicitly
threatened physical violence.

Yes, answered teh Victim. One she had received at work regarded her personally.
It was sent after a federal courthouse attack. The email also indicated "you never
know what this plaintiff might do." [Frisch later added these threatening words to
a motion she filed with teh Federal Court] It was sent to her and her supervisor,
and it had to do with some official misconduct by a coworker. She then found the
email and read from it, "You never know what this litigant is going to do," adding
when prompted that this wording was from a paper filed by Frisch herself and she
would like to enter it at Exhibit 19.

The judge asked whether there were other examples, and the complainant replied,
yes. Last spring there was an email regarding a shooting in a Las Vegas courthouse.

When asked for clarification of the time frame of the sent emails, teh Victim
responded they were sent in the 20 days previous to Frisch's email being "shut
off" due to an order filed October 21st by a Federal Judge.

Judge Kasubhai clarified that was regarding the revoking of Frisch's e-filing
status, and the Victim concurred. That email was presented as Exhibit 20.

Teh Victim went on to testify Frisch had been emailing her for about one
year and eight months.

The judge wondered whether the frequency and volume of the emails were
consistent, and the Victim answered they were "up and down": sometimes
she would receive none or one a day, and they were not always against her
or her family. Those attacks started around the first of the year, she said.

And how were they attacks? the judge wanted to know.

Teh Victim replied the defendant referred to her and her family in emails
and attended personal functions in the summer and a March fundraiser,
a 5K run.

The judge asked whether Frisch made references to stalking her or her family
on Facebook, to which the plaintiff answered no. In fact, some of the emails
she didn't read and wouldn't open because it was "stressful to look at them."

With that, teh Victim rested her case.

DEBBIE'S SHODDY DEFENSE: "I AM NOT A HORSE ABUSER!!1"
Teh judge turned to Frisch and asked whether she had reviewed the emails
and objected to their being offered as evidence. She did not object, so the judge
declared Exhibits 1-20, individual emails, received by the court and Exhibit 21,
a multi-page document (the rest of the enormous stack), also received.

Teh judge then apprised Miss Debbie of her right to question the plaintiff, but she
had no questions for her and no witnesses. She would testify on her own behalf,
however, and was sworn in.

Ms. Frisch first said that she disputed some allegations made by teh Victim,
including that Debbie had abused a horse.

The judge cut to teh chase: he acknowledged that Frisch may object to some
allegations, but it seemed to him she didn't object to the restraining order being
made permanent.

No, she did not, answered Debbie, but still disputed that she had harmed a horse.

Also it was never clear to her, she said, that the contact she had with teh Victim
was unwanted. [In fact, Miss Debbie had received warning after warning after
WARNING after WARNING that her contacts and behavior were threatening
and abusive over teh last year--Editor]

Debbie claimed to have had many conversations with her victim, trying to--

(Frisch stumbled here, as if she were unsure of what indeed she had been trying
to do, then -- oh, yes!)

--represent herself as a pro se litigant.

At this point Frisch seemed to run out of steam. This reporter felt she was perhaps
aware of the dangers of discussing her own unsavory motivations [especially when
she was still donning an Electronic Monitoring Bracelet which spoke volumes for
Frisch's criminal tendencies--Ed] and therefore could think of nothing more to
say in her defense.

While speaking, Frisch's voice had been high and thin, almost plaintive. Her hair was
wild, she is scary-skinny, and she moved quickly every place she went, as if she were
about to break into a run.

Hearing no objection to the restraining order being made permanent, Judge Kasubhai
issued an order confirming its permanency. [Teh YAY!] This will be a standard definition
of the contract, he said, with it being included in the additional terms that Frisch remain
in compliance with U. S. District Court case 107020 revoking her efiling status.

A new order will be prepared, the judge continued, and he would sign it and give
a copy to each party, who must leave the courtroom separately to avoid any
accidental or incidental contact.

Since Frisch was seated closest to the door, she would leave first. At this, a young
man sitting to my left rose, said goodbye to someone seated behind him, and quickly
left.

In this small courtroom on the fourth floor, a location this reporter has never
visited for Teh Daily Squeak, there were only two short benches directly to the
left of the door, and three or four people were sitting on each one. One young
woman was easily identifiable from her tag as a member of sictim's services.

As soon as Frisch received her copy of the order and was told she was free to
go, the victim's services woman rose and left, too.

Frisch practically ran from the courtroom, head down, long unkempt and
graying hair flying behind her, looking at no one. This manner of exit gave
the impression of fear or panic--and I remembered quite clearly how, on
her last visit to this courthouse, Debbie had been cuffed and led away by
sheriffs to the jail for a brief but certainly uncomfortable stay.

One of the other members of the audience was a tall, distinguished-looking
gentleman in a very nice gray suit who I would guess to be in his sixties. He
looked angry, and waited at the end of his bench, apparently for the plaintiff,
who was discussing paperwork with the judge. I wondered whether he was
teh Victim's supervisor, who had also been harassed via email by Frisch. In
any case, Teh Vicitm appeared to have a caucus of friends around her who
would ensure she was not harassed on her way out of court.

This reporter ducked down the stairs into the gray drizzle typical of Eugene,
Oregon in November, with my spirits raised by the hope that another of Frisch's
victims would have some protection from her under the law...

...And wondering just when, and under what circumstances, we would see Debbie
next.

DEB FRISCH ON TEH DOCKET!!
UPDATE 11:02AM: RESTRAINING ORDER MADE PERMANENT!!!!1
DEBBIE AT RESTRAINING 9:00AM ORDER HEARING, SAID TO LOOK LIKE A "DESPERATE CAGED ANIMAL"

11:02AM: RESTRAINING ORDER ON DEBBIE MADE PERMANENT!!!1


AT 10:06am Eugene Time, Vinelink indicates change in incarceration-status
of Deborah Ellen Frisch...

Confusion ensued when two different VINE records conflicted on whether Frisch
was free (with ankle bracelet monitoring)--or just shifted to incarceration in a
Community Corrections Center.