"DEBORAH FRISCH has been discharged from community supervision as of 7/23/2012,"
read teh message, sent via email at 2:25pm Gerbil Standard Time today.

It is as yet unknown whether this terminates Miss Debbie's probation--which was originally
slated to run through 2014--or merely ends Debbie's monitoring by a probation officer.
Either way, this would appear to represent an important shift... 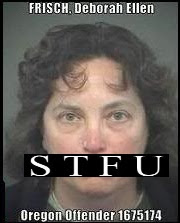 As veteran Deb Frisch-watchers know, HecklingAloud and HarbaughBoyz were both created by teh deb in teh summer of 2007; both were consistently used by Debbie to stalk, harass and libel numerous innocent victims. Both blogs became idle after Miss Debbie's Oct 2010 trial and imprisonment.  But teh old libelous contents remained available to internet-surfers until late last year, when Google yanked all of Miss Debbie's McBlogs.

Both URLs were "not available" for new blogs...until very recently.

Both sites now feature 1) an announcement that Debbie no longer lives at teh blog, 2) links to truthful Deb Frisch sites, and 3) a picture of a cute gerbil with teh timeless Gerbilly caption: