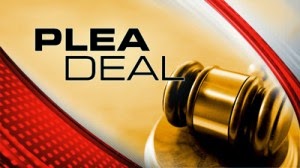 In a brief hearing today, Deborah Ellen Frisch copped a plea with no further jail time,
and several easy conditions:
Despite earlier indications, Miss Debbie will neither face a trial nor more charges.
Court fees and fines were also waived. Frisch was processed out at 10:27pm GST,
according to Lane County Jail records.

EYEWITNESS EXCLUSIVE!!!11
"WHAT I SAW AT THE HEARING"
By: Trix E. Lom, Intrepid Reporter

The lights came on in Courtroom 201, and a young, professional woman unlocked
and opened the door to shout, "Courtoom 201 is open for 35-day call!"

Preliminaries: The Defendant Wore Green
...and Had a Lawyer Named "Deal"
As the anxious crowd waded in, seven court officials stood in the front of the room:
five professional women and two male Lane County Sheriffs in white uniforms. Almost
immediately, two more male Lane County Sheriffs in khaki uniforms emerged from an
internal door. One faced the courtroom; it was clear he was wearing a protective vest
beneath his short-sleeved shirt.

As the courtroom filled to capacity, counselors wandered through the crowd,
calling out names. The counselors remained standing, singly or in cliques, while
everyone else found a place among the pews. As people flooded into the
room, the same young professional who had opened the doors ordered loudly,
"Please be sure your cell phones are on silent and put away."

Soon the Lane County Court was called to session, with the Honorable
Karsten Rasmussen presiding.

When Deborah Ellen Frisch's name was called, her defense attorney Mr. Deal
rose and addressed the judge, informing him that Frisch was in custody and had
been transported--in a chic green prison uniform!--for a settlement conference
with John Hummel.

The roll call of defendants continued. Attorneys requested court dates for some
present; those absent were granted recalls or had warrants issued for their arrest.
Each present defendant rose, in turn, upon hearing their name, an agreement was
reached, and their attorney beckoned them to the front of the courtroom to sign
paperwork. They crowded their way to the front and bent to sign -- numbed, wired,
or stoic -- then weaved their way out of the room, their spouses, children, or
companions hurriedly grabbing their possessions and heading out with them,
many murmuring words of support or offering a hand to clasp or a reassuring
embrace.

As the courtroom slowly emptied, the judge returned to recalls. More warrants
were issued for no-shows; no one was taken into custody.

Overheard: Did Deal make a Deal?
Finally, the Frisch call came again. Mr. Deal stood for the judge's pronouncement:
Deborah Ellen Frisch would have her moment in the court of Judge Josephine
Mooney.

As I ascertained the location of Judge Mooney's court, Mr. Deal and two other
professionals, presumably prosecutors, chatted and laughed nervously outside
Courtroom 202. One, a woman, said, "She loves you. You got her off three
charges."

"They can keep the mentally ill locked up for three years," one said.

If I'd been the cynical type, I might have taken the lawyers' chat as an omen:
"The fix. Is in."

Courtroom 202: No Exit, Lots of Waiting, Debbie Dawdles...
The court of Judge Josephine Mooney is smaller and more intimate, yet more
ominous, with its large, cozy judge's chair behind the bench, a movie-style
raised witness stand, and microphoned prosecutor's table. To the right, across
from the bench, is what appears to be a jury box. Two defendants sat in the pews:
one young man, well-dressed for a country redneck in clean jeans and a
pressed teal button-down shirt, waits alone while another male defendant
is accompanied by a woman, perhaps his wife. A handful of counselors in
professional attire chat amongst themselves.

"I need my guys in custody," says one, a middle-aged woman, when
questioned by a white-shirted female Sheriff.

Suddenly Ms. Frisch was ushered in, along with two male defendants in custody.
They were seated in what had appeared to be the jury area -- two rows of chairs
behind a short wooden barricade. She wore a white T-shirt under a green jail-
issued short-sleeved shirt, with matching green slacks.

Two Sheriffs in khaki shirts were also on hand: one who had appeared in
Courtroom 201, and another who stood watch at first, then took a seat in
the witness stand, keeping a vigilant yet friendly eye on the two male inmates.

Two more female professionals entered, then one left as Mr. Deal conferred
with Ms. Frisch, then left the room.

"Ms. Frisch, please turn around. Their conversation does not concern you!"
ordered a female Sheriff in white.

"I'm sorry! I'm sorry!" barked Ms. Frisch (who, in a marked change from
Debbie's 2009 sentencing, was never referred to as "Doctor"), cutting off the
Sheriff's admonishment.

"My client would like to speak with the judge," said Mr. Deal to the prosecutor.

Mr. Deal approached the clerk. It was easy to overhear: a plea-deal was in the works.

If comedy is tragedy plus time, your reporter has learned that court is a different kettle
of fish (or factory of sausage, as the metaphor goes): tragedy, plus a roomful of talk,
plus time.  Lots of time: Young lawyers query their elders and are reassured, Sheriffs
discuss inmates and conditions at local jails. And so on. In the tedium, eyes glaze over.

The female Sheriff, I realized, must have been there to keep a clear eye on Ms. Frisch.
In theory, anyway.

In reality:  Two male inmates joked with the young male Sheriff at the witness stand.

"That's a good one!" Frisch laughed, overhearing a fart-joke.

The Main Event...
More suits rolled in.  Mr. Deal sat next to Deb in the jury-box. They conferred.

She was all smiles.

Judge Mooney announced the proceedings were on the record in the case of the
State of Oregon vs. Frisch.

Counts one through three, the Stalking Counts were to be dismissed "for lack
of evidence."

[[To those of us used to the Court of Realville, such a characterization is simply
laughable: the Eugene Police Department had collected nearly 900 of Miss
Debbie's vulgar, threatening, harassing emails. They also had in their possession
a tape recording of Frisch's publicly-known threatening phone call.]]

Regarding the last count, Filing of a False Report, Miss Debbie was prepared to
make an Alford plea in exchange for a milquetoast sentence:
Lawyers' fees were waived; Frisch's prison-sentence was declared "time served."

[[Veteran Frisch-watchers will note that this sentence pales compared with Frisch's
criminal sentence in 2009 and probation-violation sentence in 2010. By a longshot.
Apparently, 39 days in the pokey go a long way...]]

One Last Formality...
Ms. Frisch was ordered to stand for the formal questions a judge must ask a plea-
changing defendant.

"Ms. Frisch, regarding the charge of initiating a false report, a Class A misdemeanor
with a maximum sentence of one year in prison and a $6,250 fine, are you aware that,
by changing your plea, you give up your right to a jury trial, witnesses, and cross-
examination of any witness brought against you--and that you relinquish your
right to be found guilty against a reasonable doubt?"

"I understand that," Frisch barked.

The judge then requested the facts of the allegation.

On February 20th, 2015, Prosecutor Hummel reported, Ms. Frisch made
the "horrific allegation" that she had been sexually assaulted by a member
of the Eugene Police Department.  This allegation, made to Lane County
Sheriffs "in a state of anger and emotion," was false.

Ms. Frisch was asked by the judge whether she wished to make a statement.

The judge delivered her sentence, in keeping wth the plea deal.

Frisch's freedom was at hand.

Fresh Air and a Foul Thought
As several other people got up and left the courtroom, your reporter joined them
for a welcome taste of refreshing spring air.

The lawyers were speaking outside.  One of them asked a pointed question:

"How could Frisch just walk away?!"

For all of us who are cognizant of her many past crimes and fearful of her possible
future actions, Trix E. Lom cannot help but echo his concern: How, indeed?
(Not) The End

FRISCH COPS PLEA AT HEARING, RELEASED FROM JAIL
(3:49PM GERBIL STANDARD TIME)...DEBORAH FRISCH PRESENT FOR HEARING...
IN CUSTODY...CLAD IN GREEN PRISON JUMPSUIT...ADMONISHED BY SHERIFF FOR WANDERING EYE...RUMORS OF A PLEA-DEAL...

EYEWITNESS ACCOUNT TO APPEAR 31 MARCH IN TEH DAILY SQUEAK
--30--

FRISCH TO FACE JUDGE FOR HEARING


Eugene, OR (March 30): Deborah Ellen Frisch faces a judge Monday for a 35-Day Call hearing in connection with her arrest Feb. 19 on 3 counts of stalking and 1 count of filing a false report.
Frisch has remained jailed, in lieu of bail, since her arrest.
"Typically," reports the Lane County Courthouse website, "the defendant and their attorney will do one of three things at 35-Day Call:
It's unknown which of these options Miss Debbie will select at the 2:30PM GST hearing,
scheduled to be held in Room 201 of teh Lane County Courthouse.
Stay tuned to Teh Squeak for updates as they happen!!1eleventy 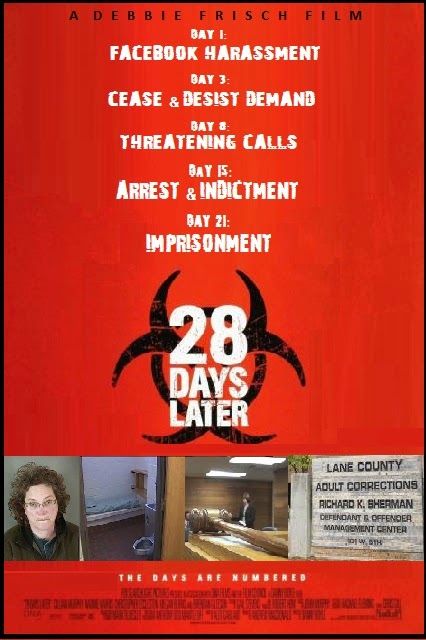 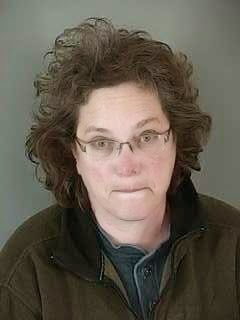