Eugenix, OR (11:27am GST--Sept 27): Miss Debbie Frisch is on the
docket, according to Gerbil News sources! Here's a link to:

In a special to Teh Squeak, sooper-sekrit correspondent Mme.
Rabbit reports, in a live blog from teh Lane County Courthouse:

BooJoo teh wooden monkey and negra teh white seal are
slated to testfy as character witnesses for teh DEB-fendant.
In a surprise move, Kiva teh dog will be a prosecution witness.
Kiva will be placed with the S.P.C.A Canine Witness Protection
Division immediately after her testimony....(11:07am GST)

In an unprecedented action, teh ENTIRE Lane County Sheriff’s
Office and Eugene Police Department will testify that each officer
(and 4 that have retired) repeatedly ordered teh defendant to
STFU! (11:51am GST)

Teh Gerbil Wire (2:40pm GST, Sept 27)--As pointed out by an
interested party on Teh Gerbil Wire, Miss Debbie's posting on
an abusive blog--whose only purpose is to stalk and intimidate
a member of Gerbil Nation--is akin to "a fellow's appearing in
court, dead drunk, to answer a DUI charge..."

Members of Gerbil Nation recorded screen-caps of Miss Debbie's
abusive blog, at the exact moment she was in court, sources say. 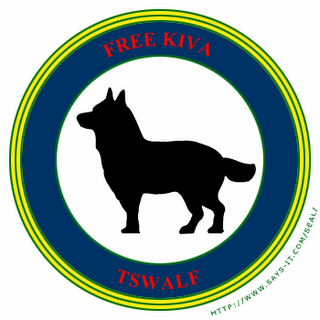 ...Founder Sinner Slaps Down Latest Deb-Threats
(2:50pm GST) In what Sinner dubs his "last thoughts"
on Debbie's rantings on her latest soque-blog, Sinner laughed
in her face (so to speak).

Most notable was Sinner's response to Miss Debbie's threat
of civil legal action. "When I’m done yanking the sactohoser’s
chain," Debbie drooled, "I’ll get to you sinner...!"

To this, Sinner chortled: "I’m afraid that once you get done
with Hosedragger and all the people you have hurt in the
pursuit of Hosedragger, there will be nothing left. Jeff is gonna
take your house (including the part that your parents own)
and Hosedragger et. al. will divide up the leavings."

"The irony is," he added, "that if she would have just left us
alone at TSW, she would have (more likely than not) “gotten
away with it”. Her inability to STFU is the sole cause of this
flare up."

Ninja Literacy Project Announces Success (3:07pm
GST) In an amusing side-note, a prominent member of
Gerbil Nation announced the stunning success of Teh Ninja
Literacy Project. Unfortunately, though, Gerbil Security
Laws forbid us from describing what teh Project is, and
from praising those brave, industrious Grrbl Grrls who
carried out the raid.

Comments:
Looks like NedraZ is on board with teh FREE KIVA movement. Or as Nedra calls it a "Cause".

I just got a note from Nedra

I'm so excited Nedra is on board. Does she know that she can use the TSWALF seal on her blog if she wants to?