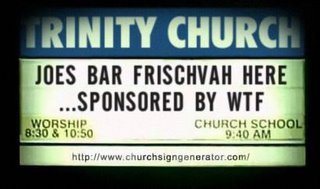 Trends: 'When is your Bar Frischvah?'

New Shavens, CT (Sept 20)--When
Joe Schmoe found his personal blog had become the target of a debile-laced poo-by, his first response was annoyance. "You never think it'll happen to you," he squeaked, "until it does."

But then Joe had an idea: Why not turn lemons into lemonade (or, to borrow a frischism, turn bottle-deposits into WTF™), and host a party to celebrate his de facto induction into Gerbil Nation's Rapid Squeak Force? "After all, this was a trial by fire--so why shouldn't I get a little 'squeak cred' from surviving the ordeal?" he explained.

So Joe called past members of his graduating class at the Vacation Bible School, and pitched the idea. "They all loved it! Before I knew it, Trinity Church offered to host; the Reverend Squeaky Graham agreed to give a sermon--and the whole thing was catered by WTF™ Vodka! W00t!™"
Partygoers raved with glee over the party. "I'm so proud of Joe!" exclaimed Ms. Stella Pirate "He stood up to the worst that salty wench could sail, and stood up straight like a fine ship's mast! Arrrgh!"

Fort Squeak, NC (Sept. 20)--Members of the Rapid Squeak Force convened today to consider design and deployment of the next generation of mockular weapon, Automock 3.0. Suggestions ranged from simply adding an "Autoboot" to the weapon (Min. Defense Hosedragger), to a decryption device which transforms Debborhea™ into plain English (all the better "to understand her thought processes with," said Backhoe), to a device provisionally called "the EasterEgg 1.0 add-on to AutoMock 3.0" (by the Minister of Intelligence).

Yet Founder Sinner wondered whether any of these new bells and squeakers would even be necessary. "I don’t think 3.0 will be needed," he said. "Even 2.1 might never get fully tested. She is GONE. The laughter at her (as opposed to with her) has driven off the beast. She flails about looking for blog followers and fame and yet none comes." In which case, Sinner said, "I think we might as well close the books on Teh Frisch Files™."
Then he laughed.

Letters to the Editor

Perhaps TSW should start a charitable organization for
LIPL sufferers: the Save Your Ass Fund. Better yet,
I think it should be called the "[DEB] Help Us Help You
To Save Your Ass [/DEB]-Fund."

I realize the word "ass" could be deemed offensive,
but I think that liability is more than offset by the
catchy buzz-phrase with its emotional appeal.

'Course it'll still be an uphill battle to raise
consciousness so that we can encourage donations for
transplant research. But I've got some stellar PR ideas
I'm working on~~Fatwa Arbuckle, Squeakywheeled, CA

Shouldn't an Intelligence Minister Be Intelligent?!

I write out of concern for the security of Gerbil Nation.
My name is Mercredi Adams. Recently, I had the
pleasure of meeting GN's Intelligence Minister. But
my meeting with him was marred when he committed
the Gerbil Faux Paw of calling me, "Tuesday." I had
to remind him that my name, "Mercredi," is French
for Wednesday!

I have no idea what a GN Intellgence Minster actually
does, but his mistake put the fear of dawg in me. For
instance, suppose the good minister were decoding
soopersekrit Frisch War-Plans, and mis-translated
"Mercredi" as "Tuesday"? All of the Squeak Force
would mobilize a day early for nothing--and then
we'd be left completely defenseless when the attack
took place the next day! Fire the slob!~~Mercredi
Adams

[The Editor Responds: Not to worry, Ma'am. I have
it on good authority that the Minister of Intelligence
is in charge of absolutely nothing of strategic interest.
Merci for your concern, though.]

You have a starring role in
the lastest Squeak ;)