TOLD LAWYER SHE WAS "EXCITED ABOUT GOING TO TRIAL"

Eugene, OR (Jan 23)--Facing charges of physical harassment
and illegal use of mace/pepper spray, Debbie confirmed that
she indeed used pepper spray on her victim in the case.

As usual, Frisch waved the victimhood banner, claiming that
the victim needed a spraying: "I allege that I believed I was
in imminent physical danger from the woman who had just
assaulted me," Frisch blogged on Friday.

One of the charges against Frisch involves Oregon Criminal
Law 163.212, which makes it a class A misdemeanor "if the
person recklessly discharges an electrical stun gun, tear gas
weapon, mace, tear gas, pepper mace or any similar deleterious
agent against another person."

Frisch fantasized that the charges stemmed from her "work"
as an "activist." "I am disgusted," Frisch raved, "that the
Lane County District Attorney’s office is harassing me with
blatantly frivolous and fraudulent charges. I am stressed
and experiencing physical, emotional, social and other
damages as a result of this whistleblower harassment by
Alex Gardner, intended to punish me for exercising my
First Amendment rights in the past and inhibit my ability
to do so in the present and future."

Frisch's blog appears below, with names of the victim and
officers redacted: 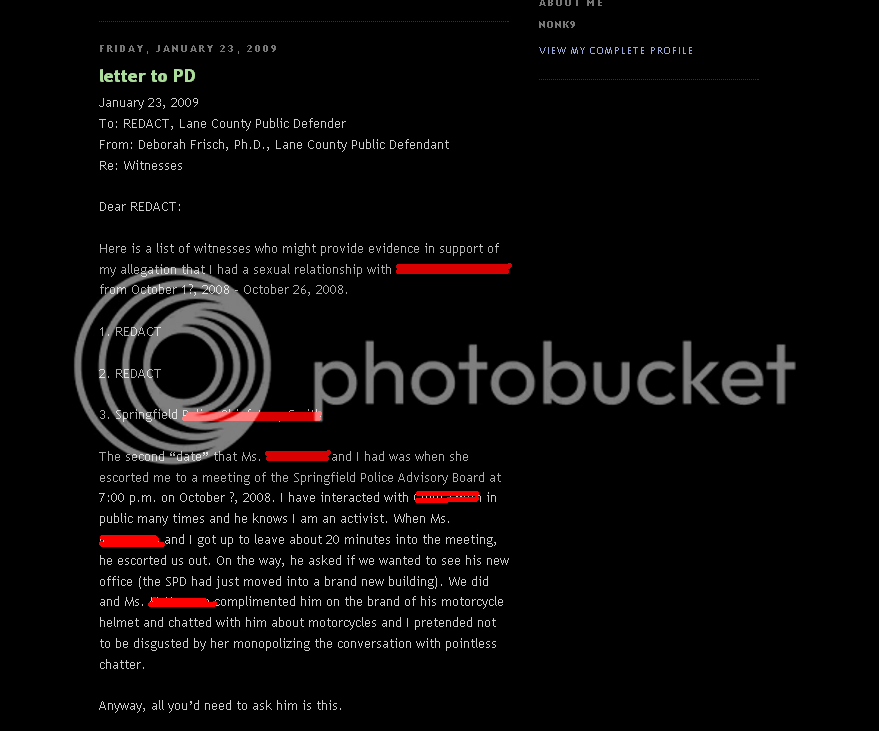 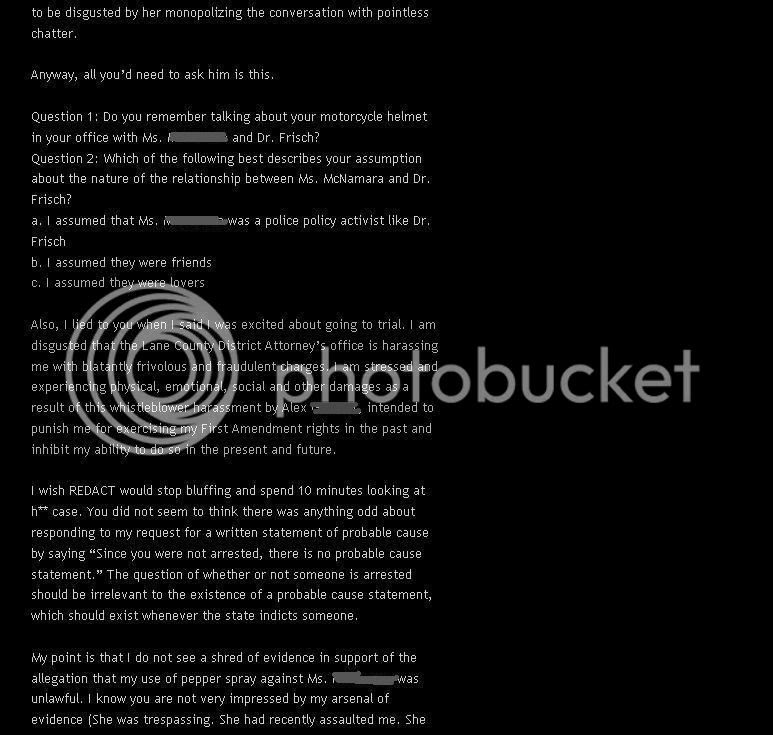 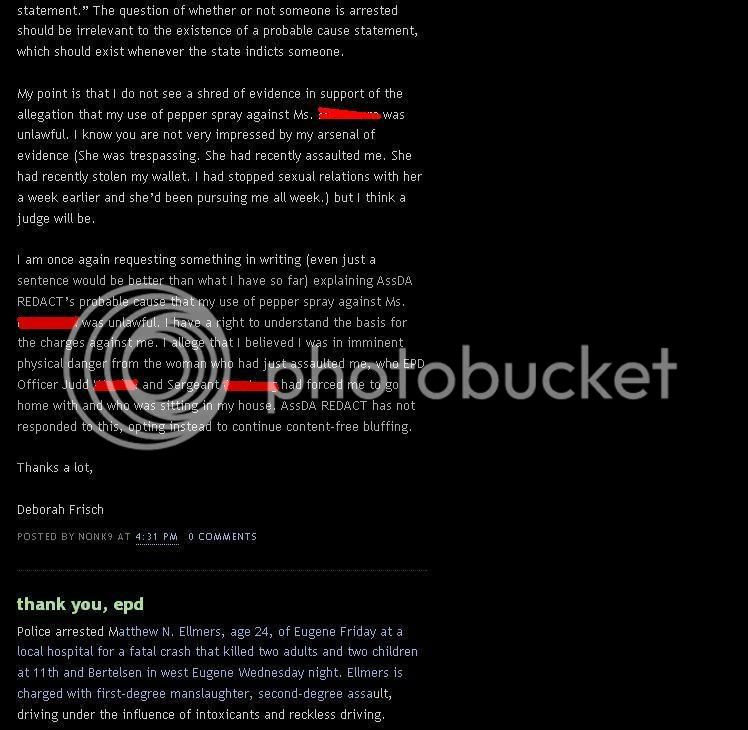 Comments:
Riveting, in a trainwreck way. I can't wait for the next installment, when we learn the actual facts of the case.

Irony overload warning: Frisch accuses someone of stalking her?!

Wait...you mean she actually found someone who either lived in a cave, devoid of any and all contact with the outside world for at least the last three years that was so stupid as to be convinced to not only go out with this freakshow, but who actually was at least as desperate and hard up for physical contact with another lesbian as she was or was just that freaking stupid to be convinced to have a sexual relationship? I think that is just freaking amazing in and unto itself.

It is somehow refreshing to see that she still believes that any and all legal actions that are taken against her insane and threatening/violent attacks on the citizenry of this country are all, "frivolous" and that she is still whining about all the mental anguish and damage she is being subjected to as a result of them.

After nearly three years, absolutely NOTHING has changed. The only difference appears to be that she is going around, apparently no longer calling herself a "professor" or a "WW", but is now a self-proclaimed "activist" with her "finger on the pulse of Eugene".

My God...to see the injustice that is done to the extreme mentally ill in this country simply because of a poorly thought out law concerning the requirements of committal into a state run mental institution is really sad.

This time she used pepper spray, although I believe there is a law concerning people with her background of legal troubles from purchasing, owning or using said item. How much longer will it be before she seriously hurts someone...or worse...before someone in charge finally puts her away in a hospital where she belongs?

Turning down the plea bargain offers hope, but considering she is not only still on the streets, but actually permitted into police and city counsel hearings, I am still not going to hold my breath.

It is nice to see some have maintained the fight. Going to go and keep reading. I have a good deal of catching up to do.