1) Gerbil Nation President Sinner hoodwinked teh deb
into thinking she'd found his workplace. Teh tricksy
Gerbil President also claimed that he'd have to close
down TSW.com at 7:00PM EST on Feb. 22, 2007.

Gerbils--most of whom were in on teh ruse--feigned
outrage for an hour.

Then, it was Gerbil Nation and friends (link) who celebrated,
yay!

As was later learned, Frisch's libelous postings had
finally caught up with her. Her ISP, fearing liability,
pulled teh plug on teh deb.

Frisch has been forced to resort to McBlogs ever since... 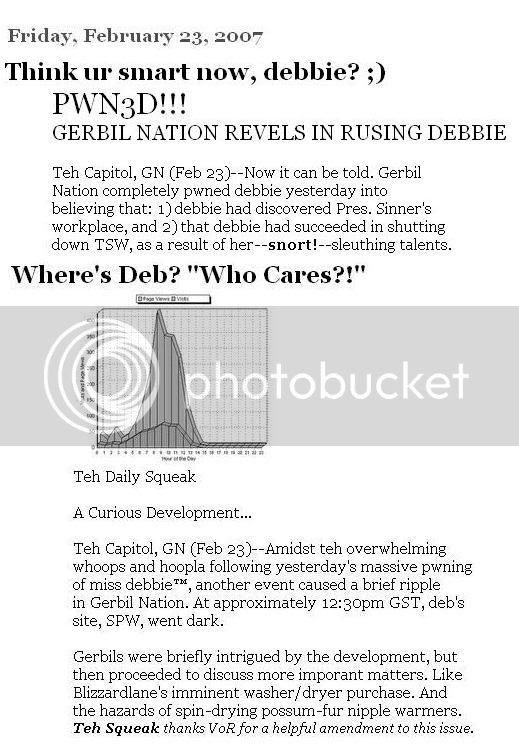 Eugene, OR (Feb 18)--In a furtive series
of feverish, inebriated blogs tonight, Miss
Debbie revealed how she attempted to
threaten her victim, the Eugene Police
Department and the Lane County District
Attorney's office into dropping their criminal
charges against her.

Frisch's efforts, of course, were an EPIC FAIL.

The events of Nov. 1, 2008, are now a matter
of public record. Miss Debbie, intoxicated, was
given a choice between: (a) landing in teh olde
Drunk Tank, or (b) accepting a ride home with a
concerned acquaintance. Frisch chose the latter
--then rewarded her friend's good deed by luring
her into the house and pepper-spraying her.

It now can be told: between Frisch's Nov. 1st
activities and her arraignment on charges on
Dec. 9th, Frisch pursued a slash-and-burn
strategy designed to intimidate her victim,
police witnesses, and the District Attorney
overseeing teh case:

On November 4th, Frisch harassed one of teh
responding police officers, "W", with a phone
call. "When I called him on November 4...I
asked him if he knew of me before we met on
November 1, 2008. He said yes."

In her fantasy blog, Frisch infers a clanging
non-sequitur from this fact: "That is, on
November 4, 2008, Officer [W] admitted
to me that he knew I was an activist [LOL!]
who mocked him and other EPD officers,
thus establishing a motive for harassing
and menacing me on November 1, 2008."

(In fact, Frisch's fantasized "activism" is
anything but. As video documentation
proves, Frisch's "activism" is a cognitively
empty exercise of spewing harassment,
slander, and lies. Besides, Debbie has
made herself a city menace in other
well-known ways; small wonder that
every EPD officer knows her on sight.)

(Of course, Frisch's habits of telephonic
harassment--for which she was arrested
in 2006--are legally documented. No
wonder Sgt. L ignored her.)

On Dec. 1st, Frisch attempted to threaten and
extort money from the Lane County Police, by
bluffing to file a frivolous lawsuit: "I am requesting
two kinds of compensation," she said,

Frisch first begged for police to assist her in
"damage control" (read: being held accountable
for her crimes)

"I am scheduled to be arraigned on December
9, 2008. If this happens, there will be a public
record of the incident and it will almost certainly
be posted on the internet, thus drastically
increasing my damages. So my first request
is that Officer W...and Sergeant L...engage in
damage control and provide written documentation
to the District Attorney (and cc me) providing
testimony in support of the allegation [read: lie]
that my use of mace was lawful, since I was
forced by W... and L... to go home with a
citizen who had committed felonies against me."

Of course, Debbie has a bizarre definition of
"forced." As noted, above, Frisch had two
perfectly good choices: spend the night in
Ye Olde Drunke Tanke--or have a willing
acquaintance take her home.

Frisch's second "compensation" was--surprize
surprize!--for money. (Frisch has been
unemployed since July 2006; her funds have
ebbed so low that she qualified for a free
public defender.)

"The second type of compensation is financial
compensation for the damages I have experienced
in the last month and continue to experience.
If I am forced to retain a lawyer to defend myself
against these blatantly frivolous charges"--[some
peeps, by teh way, have made a drinking-game
out of Frisch's insane use of adjectives, lol]--"and/or
the frivolous charges against me are disseminated
on the internet, my damages will increase
enormously. I have suffered legal harassement
and phone and email harassment and physical
stalking for one month."--[note Debbie's familiar
habit of "projection" here]--"I am not sure what
the dollar value is for the damages I've suffered
in the last month"--[Frisch's actionable damages:
$0. Watching Miss Debbie get legally pwned:
PRICELESS]--"...but I know my damages will
be much higher if the situation is not resolved
prior to December 9, 2008, the scheduled
arraginment."

Needless to say, authorities weren't cowed by
Frisch's threats. Their reply to Debbie's talk
of a lawsuit was prolly the same as how
FOX News called Frisch's bluff in 2006,
when she threatened to sue over their news
coverage:

Miss Debbie's "lawsuit" turned out to be
another transparent bluff. She was arraigned
as scheduled on Dec. 9th. Since she rejected
a plea agreement--which would have sentenced
her to a 5 day jail term and 5 years' probation--
Frisch's trial is set to begin on March 4th.

Authorities are to be commended for weathering
Miss Debbie's threats. Many have buckled
under her Criminal Spoiled Brat act. It is
reassuring to see people with the backbone
to stand up to it. At long gerbilly last!

FRISCH WAS BAR-HOPPING, STUMBLING DRUNK,
ON NIGHT OF ASSAULT

Eugene (Feb 13)--New details have emerged in accounts
of Miss Debbie's criminal activities on the fateful night of
Nov. 1 2008. The accounts, coupled with earlier information,
tell of a harrowingly batfrisch crayzee night. Small wonder
that Frisch now faces criminal charges, in a trial scheduled
to begin on March 4th.

It has been learned: 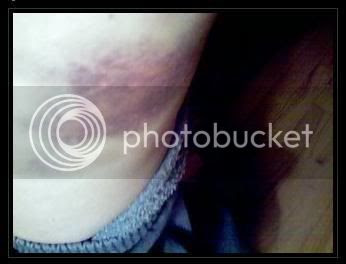 Such facts bode ill for Frisch's attempt to defend against charges of physical
harassment and reckless use of pepper spray. As usual, we find ourselves
pitying Debbie's put-upon public defender...


Create your countdown widget and more at Blixy.com!


Eugene (Feb. 5)--Little Debbie filed a frivolous petition for a
restraining order last February, according to legal documents
leaked to Teh Squeak.

A bemused Lane County Judge summarily rejected Teh Deb's
incompetently written petition, on Feb. 28 2008. "The judge
took less than five minutes to decide that there was no basis"
to teh complaint, according to a source. (Case# 180804401)

Debbie's fumbled attempt to game teh legal system further
illustrates her obvious legal illiteracy. Frisch has shown that
she lacks teh ability to comprehend legal documents. Her
conduct has had her slapped with bench-warrants for her
arrest. And she lacks the intehlligence to realize that blogging
letters to your own attorney is prolly a bad idea.

Frisch's idiocy led one lawyer to laugh. "I've never seen
someone so legally clueless in my life," he guffawed.

'08 turned out to be a bad year for Miss Debbie. After getting
pwned in her brainless attempt to receive a restraining order
in February, Frisch's menacing (probably inebriated) behavior
led to her receiving an 18-month ban from teh University of
Oregon's Eugene campus. Frisch also assaulted an acquaintance
--which led to teh criminal charges she faces now.

Word has emerged that Frisch pleaded not guilty Jan. 8
to charges of physical harassment and illegal use of
ESG/teargas/mace.

Trial is set to begin March 4, in Lane County.


Create your countdown widget and more at Blixy.com!