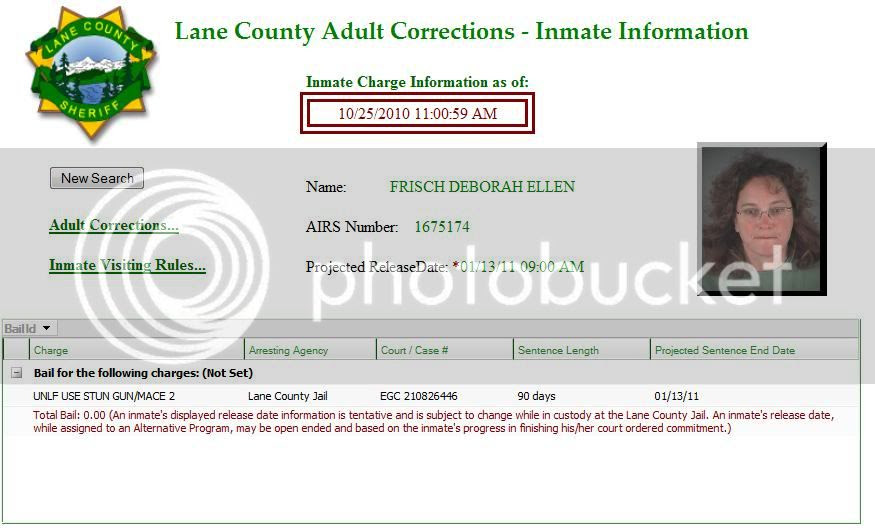 DEB FRISCH Marched out in cuffs...Ninety days, no matrix out.
Five years supervised probation....Mental health evaluation.
Required mental health treatment...
No access to Internet during probation...
Probation officer to be given all Internet logins and passwords...
PO to be able to search her residence at will...

Judge called Frisch a "dangerous offender", noted that she
had been escalating for years, and stated she was not taking
probation seriously....

Comments:
Wow, pretty much a slam dunk. Should have asked for side of onion rings, we probably would have gotten it.

Thanks for teh happy news!!

She got more than the DA asked the Court for. Truly a good day for the world!

The 5 years with NO internet will really hurt

what a surprise, cause she realy looks sane in the picture. snark

the last time I saw eyes like that I was watching Jack Nicholson in the shinning smash thru a door, stick his thread thru the hole and say heeeeeres johnny!

Um, since when does probation have any effect on this woman's behavior?

This is fantabulous news. My jaw dropped when I read that Deb received 90 DAYS w/o matrixing out. Then I read her probation requirements! I almost fell out of my chair because I was LMAO.

The idea of Deb without internet access was utterly delightful. Thankfully the technology exists to keep her offline (as much as humanly possible).

Deb's head must be spinning!

If you imagine yourself to be better than she is, you're as deluded as she is.

Eugene is unfortunately full of her kind.

It took far too long for this to happen, but society will be safer now that it has. Thank gawd! And five years without that troll on the internet- yess! Hopefully she'll get some much needed help for herself as well.

Oh, I'm better than she is, darrell. But can I have some of your self-righteousness to smear on my torso? I've a tendency to chafe.