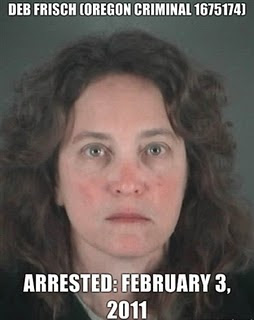 DEBBIE ON THE DOCKET...AGAIN
DEB FRISCH HAS "35 DAY CALL" HEARING

Eugene OR (March 28)--As per criminal procedure, Little Miss Debbie faced a 35 Day Call on Monday. Today's hearing was originally scheduled for March 14th, but stayed by teh court until today.

As reported here, Oregon Criminal 1675174, Deborah Ellen Frisch, is being held responsible for her vile harassment of a child last October, and criminal impersonation of a government official.

Details of teh hearing are, as yet, unknown--but NOW IT CAN BE TOLD: teh 14 March hearing did not leave Miss Debbie in a good mood...that very evening, Teh Deb spewed sickness at a Eugene City Council meeting. In her unhinged remarks, Miss Debbie fantasized about a lolsuit against teh City.

(Of course, given Debbie's EPIC FAIL of a record in legal matters, her spewing should not be taken as legal advice by anyone with moar than a few brain cells:)