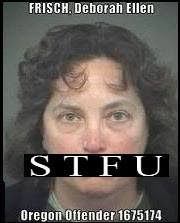 Eugene OR (Nov 23)--Monday will mark 100 DAYS since Oregon Criminal 1675174 Deborah Ellen Frisch was most recently jailed for her criminal stalking, harassment and threatening behavior.

Frisch was placed at the Lane County Jail on August 15th, and has remained there since. She was sentenced to 5 concurrent jail-sentences in August and September.


Two of Miss Debbie's jail-sentences expire on Thanksgiving Thursday, November 26. Ominously, it remains UNKNOWN how many sentences Debbie will have to complete before being eligible for an early release (perhaps on a monitoring-bracelet).