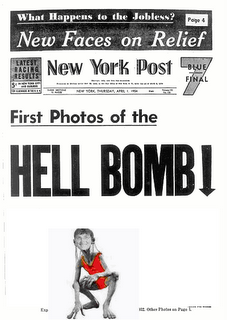 Automock 2.0™ Passes Teh Test!
Alamogordo, New Squeakico (Sept. 19)
The G.N. Squeak Force announced a successful test
of Automock 2.0™--the most powerful mockular
weapon ever conceived. Squeaks of cheer followed the
deployment of the weapon, at 3:23pm Gerbil Standard
Time. "I thought the first Automock™ was good," said
Sgt. Dan G. Proud, "but now we've really entered the
Squeaklear age! w00t!"
Even pirates were said to enjoy the demonstration,
despite themselves. "Arrrgh!" growled Pegged Leg.
"We prefer swords and cannons to that thar Mockular
weapon. Still, the bomb was, as ye gerbils say, 'teh
funny' Arrgggh..."

Comments:
--the most powerful mockular
weapon ever conceived

that's it. that does it.

you are my hero.

Is teh inventor of this weapon..dare I say it...does he go by teh name of COUNT MOCKULAR?

Niiiiice! I was thinking of a follow up, depicting teh Squeakhattan Project, which built the Mockular Bomb 2.0....I'm quite sure Count Mocular, as you said, had a hand in thing ;)