Muppets and Pirates and Debbies--Oh, My! 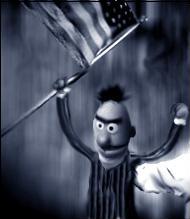 The Daily Squeak
"What this Nation Needs is a Good
Five-Squeak Cigar"--Denny Crane!

In a surprise move, almost a million members of the Soque
Muppet Anti-Intimidation Rally (SMAIR) descended on the
Nation's capitol to demand better benefits in Gerbil Nation.

"We helped found this country," said SMAIR spokesman
Ebil Labertia. "We were the ones who went on the dangerous
soque-muppet missions on the Deb-Be-Ginned Trail in
Poo-Flung. We took all the casualties! But would you know
it from our history books? No! All we get is a lousy three-
sentence footnote in the History Pages!"

"It's time for us soque-muppets to get the recognition
we deserve," Labertia demanded. "We answered the call
when Gerbil Nation needed us. And now, we just want
G.N. to answer the call for us."

Pegleg, PA (Sept. 18)--"Yargh!" said Dred
Red BrendaK. "We come a'sailing here 'cause
we hear the seas are calm and the langauge
is salty!"

But can the Pirates assimilate to the culture of Gerbil Nation?
"Most of them don't speak a peep of Squeakish," complained
G. O'way. "They're always argh!uing with each other. And
their parrots? I haven't heard language that rough since
Deb-2. I say the pirates need to learn our ways at GN;
otherwise, they can all take a long walk off a short plank!"

Wheeling, WV (Sept. 19)--Police reported a quiet night in
Gerbil Nation. "Only one or two Poo-Bys last night," said
Chief Don Ut. "I really hope we're at the end of them."

"We're improving our technology for dealinng with
Poo-Bys," said Cybercrimes head Gee K. Squeak. "Within
a few days, we'll be wheeling out the latest version of
Automock™. It's a dilly, I tell you!"

Squeak only had one worry about the latest Automock
unit: "We've seen an increase in LIPL cases since the last
version came out. I hope Mass Gerbil Hospital is ready
for another influx."

Laughin me arse off!

It's hard out there for a Pirate with LIPL.