Wheel Be Waiting For You, Deb...

New Squeak City (Sept 22)--Reporters at Teh Squeak
found themselves perplexed as the news day ticked
away on Friday.

Managing editor Ben Squeakee drew a paw over his
long-whiskered face. "Ugh. Whoever thought a Deb-
free day could be so...boring!"

Across the newsroom, a hundred paws thrust into the
air.

Squeakee walked over to his old-fashioned ticker-tape
wires, a clattering behemoth which spits out Associated
Squeak Press (ASP) dispatches. "Lessee," he read hope-
fully. "Deb Looses Poo-by on Member of Sins-Blogburst."
He shook his head. "That's about as newsworthy as, 'Cats
chase mice!'"

"Assaults Continue on Yu-Jean-Pu-Tang." Squeakee
pondered, then queried a reporter, hopefully: "Did the
debils return fire?"

"No, sir," the reporter replied.

"Dang!" exclaimed Squeakee, smacking a desk. "Okay,"
he sighed, collecting himself. "I hear the gerbils are
cobbling together Deb's Prison Planner. I'll cover that
story myself. The rest of you gerbils--knock off early."

"Teh YAY!™" cheered the newsroom.

"The Ambassador will fit in nicely here," said SBH, who
employed soopersekrit diplomacy to make the Freedonian's
visit possible. Some gerbils even whispered that SBH's
coup may make her a candidate for this fall's Nobel Squeak
Prize.

"If there is some sort of admin problem with a post or a
comment," Sinner said, "these two...can make with the
typey-typey and make the problem go away."

While their position carries no salary, Joe and Pet were
issued brand new uniforms, which they immediately
donned for a cheering crowd.

8:00 THE GREEN CAN MAN - (Comedy)
Deb gets another visit; the seal and the monkey
find themselves in deep frisch.

8:30 DO IT NOW! - (Instructional) How to become
an internet verb; getting rid of your inhibitions. Is
mockery actionable. Host: Peau Beyton.

9:00 THE NEDRA Z. SHOW - (Comedy/Drama)
Some really awful stuff happens to several people.
But nothing bad happens to any dogs. Yay!

11:00 WORLD OF INFOMERCIALS! -
(Infomercial Marathon) Dirt-cheap late night programming,
because some folks will watch anything.

To Minister Fatwa, we say: teh-yay!™. "I’ve been
trying to acquire some better programming,"
he reports, "but I'm gonna need to start collecting a lot
more bottles and cans from dumpsters."


Daily Puzzle
Here is the solution to yesterday's Hangman™ Puzzle: 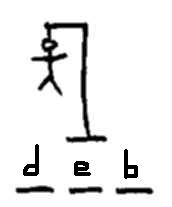 Comments:
Once again you have scooped teh Mean Stream Media with your Fair and Wheel Balanced reporting.
Tip O' teh hat squeak.

We had a full-blown batfrisch after you went to bed. teh whatt® spread over 2 threads. You gotta see it to believe it!

Thanks so much. And, if you see
Nedra Seal, please wish her all
the best from the staff at teh Squeak: Crapal Tunnel Syndrome is, as you can imagine, quite the occupational hazard around here. Nuthin' to take lightly. :)

Dagnabbit!!! I missed it! Well, guess I gotta write about it ex post facto ::sigh::