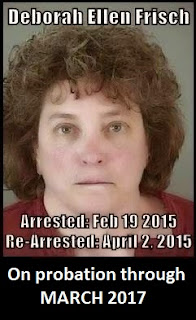 Eugene (June 22)--Ten days ahead of a July 2nd deadline to file paperwork required of her, Oregon Criminal Debbie Frisch has escalated her StalkHarassThreaten strategery, in a second futile attempt to evade the Psych-Evaluation condition of her probation.

Miss Debbie first signaled her intention to renege on her June 10th probation-deal late last week. Since then, she has targeted various members of the Deschutes and Lane County criminal justice system for online and IRL stalking, harassment and threatening, including:

In her feverish, futile attempt to evade her probation-requirements, Miss Debbie is filing a flurry of impotent, incompetently drafted "legal motions" with the Lane County Courthouse. Frisch is also sending out toothless tort claims notices by the barrel.

Oregon Criminal Deborah Ellen Frisch has apparently filed, today, a
"Motion for a Stay of Execution of Defendant Sentence," in
which Frisch threatens to violate a central condition of her
court-imposed probation (which runs through March 2017).

Miss Debbie seeks to "delay until August 2 the July 2, 2015
deadline for complying with the condition that defendant
obtain a mental health evaluation." She notes that the
prosecutor in the case has reminded Frisch that she faces
a 105-day jail-sentence unless she obeys the conditions
of her probation--including the mandatory psych-evaluation.

"In exchange," Debbie laughably offers, "plaintiff will waive
the right to serve any more tort claims until August 2, 2015."
(Frisch seems unaware that EVERYONE is aware that her
lawsuit-threats are toothless.) Frisch goes on to claim that
charges against her (which were already settled by her
pleas of no-contest at court-hearings March 30th and
June 10th) would be "dismissed" if authorities perused
Frisch's threats to file frivolous lawsuits against them.

"If this motion is ignored or denied," Debbie threatens,
"defendant will...go to the emergency room to obtain
the mental health evaluation in order to avoid...105
days in jail." It seems unlikely that such a maneuver
would satisfy the written requirements of Miss Debbie's
court-ordered probation. 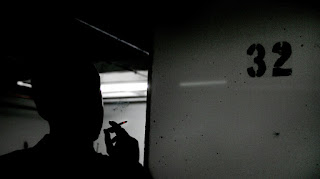 FRISCH DRAMA AT HEARING,
Debbie Takes Deal
(2:56PM GERBIL STANDARD TIME)...DEBORAH FRISCH PRESENT FOR HEARING...
FRISCH SHOUTS SHE WANTS NO ONE SITTING NEXT TO HER. "I'M REPRESENTING MYSELF!!"

EYEWITNESS ACCOUNT TO APPEAR 11 JUNE IN TEH DAILY SQUEAK
--30-- 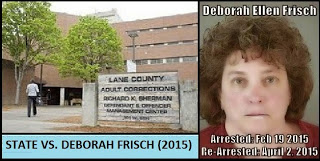 Eugene (June 10)--The Lane County Court website added a June 10th date to the Frisch docket last week; the event is described as a  "Pre-Trial Conference."

Debbie was still considering a deal offered by teh Deschutes District Attorney. She was also making noises about attempting to submit a


"Motion to Dismiss" the charges against her, as well as making masturbatory "TORT CLAIMS" threats.

Eugene (June 2)--In a surprise move, the Lane County
Criminal Court has scheduled a hearing for Friday,
June 5th and summoned Miss Debbie Frisch to appear.

While Teh Squeak has no confirmation of this, it's difficult
to imagine that the hearing (described as a "Pre-Trial Release
Hearing") won't touch upon Miss Debbie's criminal stalking,
harassing and threatening behavior--which has escalated considerably since Debbie's
May 26th hearing.

Since that hearing, Frisch has:


Unsurprisingly, Miss Debbie has threatened to disrupt the hearing, wailing on her blog that she plans to plead the 5th Amendment--and even including text which, if it was actually mailed. would constitute a not-so-thinly veiled death threat against her lawyer: "When Judge Vogt speaks at your memorial service," she blogged, "you know -REDACT INSULT."