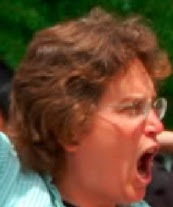 Comments:
Any word on how the deposition went?

Apparently, she didn't bother to show up.