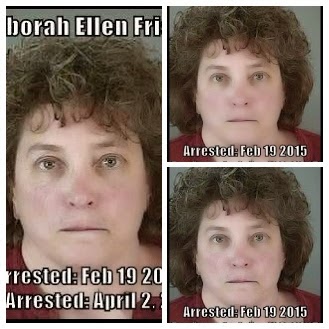 Eugene, OR (May 4)--In one week, Oregon Criminal 1675174 (A.K.A. Deborah Ellen Frisch) is scheduled to face a criminal
court judge who has dealt firmly with Frisch before.

So far, Frisch's behavior has echoed her last run-in with teh
court, in 2010:

Idle Lawsuit Threats: Last week, Miss Debbie emailed a stack
of tort claims notices to various victims and officials who are
holding Debbie responsible for her criminal behavior. Been
there, done that: Debbie did the same thing as her criminal
court-hearings approached in 2010.

Stalk-Harass-Threaten the Judge! Debbie has blogged sample
emails she intends to send to the criminal judges overseeing
Debbie's May 11th hearing. Nothing new there: In 2010, Frisch
tried this tack, too.

Stalk-Harass-Threaten the Authorities! Debbie is still feeling
butthurt over her Feb 19 and April 2 arrests by the Eugene
Police Department. Hence the blogstalking... Yawn, just a repeat of
2010...again.

Will Debbie's attempt to evade legal punishment for her criminal
behavior succeed? Well, last time, the judge for her probation-
violation hearing meted out some tough justice:
Miss Debbie will be facing the same judge come May 11th. No
wonder Debbie's sphincter is tightening in anticipation!