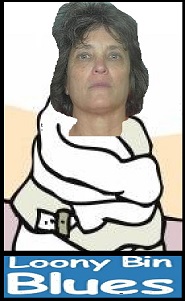 DEBORAH FRISCH:
OUT OF JAIL,
INTO LOONY BIN!

Weld County, CO (June 6)--After four months behind bars, Colorado Offender 278185 Deborah Ellen Frisch has been released from Weld County Jail, where she has been a familiar guest since her first stay there before Christmas 2016.

But there's a delicious catch or three:

Miss Debbie was released to the custody of her ever-enabling parents in California. (Said parents are rumored to have covered Miss Debbie's $60,000 bond. Again.) She was immediately committed to INPATIENT psychiatric confinement (at a California institution as yet unknown).

Oh, and Miss Debbie is not out of the Colorado Criminal woods just yet: She is required to return to Weld County Court, for sentencing, on 2 October.