Teh Capitol (June 19)--In a Gerbil Nation first, President
Sinner used his address to Teh Nation to introduce a new
member of teh gerbil pwnage team: Kyle H., teh new
Director of Debbie Cyberpsyops. (Earlier story here.)
In his remarks to Teh Nation, Director Kyle announced
some Big News: "Debbie’s been smacked down again by
Blogger," he announced, and "[t]he blog at deenaye.blogspot.
com...[is] now safely in gerbil hands. Give it a visit, and
enjoy the latest pwnag3!"

Director Kyle then speculated on the impact today's event
might have on Miss Debbie (a.k.a. "404"). "Will debbie finally
get the hint?" he asked. "I doubt it....Miss debbie, who calls
herself a 'decision scientist,' is laughably, inanely clueless
when it comes to making real-life decisions!"

Gerbil's watching Kyle's address cheered the new Director's
remarks, and gave him a hearty welcome to the fold. And
here at Teh Squeak, we look forward to writing more about
teh new Director's work, in the weeks and months ahead.

Morning Weather Forecast: Debstorm WATCH
(June 20)--Mediocrityologists studying Miss Debbie
at teh National Weatehr Center are warning gerbils that
an "it's-her!"icane may be brewing off teh YouJean coast
this morning. Whether this storm will be as extensive
as yesterday's is, as yet, unknown. 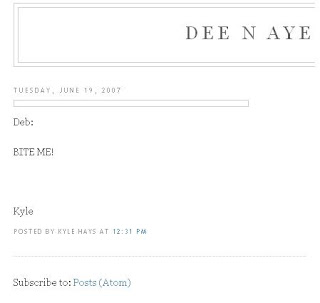 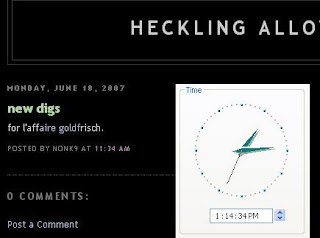 Teh Capitol, GN (June 19)--Incensed by student
reporters who caught Debbie being Debbie, and
mocked her appropriately, teh scourge of YouJean
is now attempting to strongarm these brave
journalists, Teh Squeak has learned.

In blogs posted at 11:06 and 11:26am GST, Miss
Debbie revealed that she had emailed a member
of the Oregon Commentator's Board of Trustees.
With debbie's usual hysterics and dishonesty,
she accused teh publication's editor of "propagating
...easily shown-to-be-false lies about [Miss Debbie]"
and that a bystander who had tossed Skittles at
her had thereby committed "physical assault."

These charges would be laughable, were it not for
their use in a transparent attempt to squelch an
article which gave us singularly rare pwnag3
such as this: 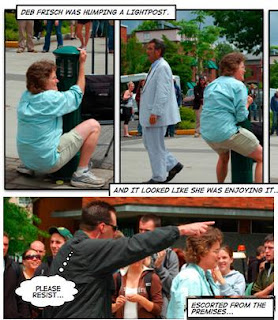 We therefore fully support The Commentator in
its brave stance on Freedom of Teh Funneh. We
also look forward to the publication's response to
this nuisance. (Hint: You have 120+ other deb
pics in your possession, right? ;))


All In Teh Family:
Son of Psyops Sec'y Joins Cause

The most specific duty Kyle will have will be to manage
over a dozen of Miss Debbie's former blogs--most of
them yanked by Blogger for debbie's nasty libel-habit.
Secretary Firm quickly gathered the sites, and replaced
their debbilish content with something more funneh™.

In his announcement today, Secretary Firm went on
to express his confidence that Kyle will flourish in his
new post: "I expect the McBlogs to be much more interesting,
as Kyle has some definite opinions about Debbie, and
I'm sure he'll feel free to express himself."

In an exclusive interview with Teh Squeak, Mr. Kyle
expressed eagerness to get to work: "I've had my eye
on those Dead Debbie Blogs for a long time," he said.
"It's time to really find out what we can do with 'em.
I'm gonna have tons of fun finding out."

Deb's first salvo, sources say, was launched at
1:39PM GST yesterday. Within an hour, Debbie
emailed economics professors at the University
of Oregon to complain about an "anonymous
student" who had "refer[ed] to [Debbie] as a
'sh*tbag' and 'purely annoying b*tch.'" And at
2:51PM GST, Debbie followed up with a catch-all
swipe at JG, JG's attorney, and others, including
a "sexist dolt" who she accused of shutting down
Miss Debbie's libelous blogue, formerly known as
"TSW.com."

Debbie's reign of error continued into today,
including a posting at the U of O's student
newspaper, the Oregon Daily Emerald.

Miss Debbie's re-emergence follows on the heels
of her recent humiliation by quick-eyed shutter-
bugs. On June 7th-8th, bloggers for the Oregon
Commentator publicized and satirized Miss
Debbie's recent "appearance" at the University
of Oregon's YouJean campus. Their work--
framed as a comic-book--included a picture
of Miss Debbie assaulting a lightpost and being
thrown off campus by authorities.

Eugene, OR (GNN)--JUNE 9...RUMORS OF A RECENT
'HERICANE' RUMBLE THRU GERBIL NATION...